The League School of Greater Boston has announced its upcoming events and fundraisers for 2023.

The school will be hosting five events that were big successes last year. Smaller events will also be held throughout the year.

The League School website will have further information on each of these events as the dates get closer.

This popular event will once again allow League families and members of the community to bike in person as part of our pre-selected classes, bike with a virtual option, or bike at a location of their choosing.

The 5K will once again be held on the school’s campus in Walpole. The race will be professionally timed and winners will be highlighted from various categories.

League’s annual golf fundraiser will once again be held at the Franklin Country Club.

The school will once again have teams participating in this iconic New England race, which runs through the picturesque Cape Cod community of Falmouth.

The school’s largest annual fundraiser and event will again be held at the Four Points Sheraton in Norwood, highlighting those who make League School such a special place and a leader in autism education.

Anyone with questions or needing more information about a League School event, or on how to become a Corporate Sponsor, can contact Special Events Coordinator Michelle Melanson at mmelanson@leagueschool.com or 508-850-3900 ext. 312. 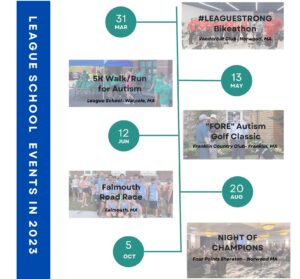