“Arnold Vetstein was justifiably proud of how League School has evolved in the 56 years since he co-founded it,” said League School Board of Directors Chairman Roger A. Lockwood. “Arnold’s passion inspired many of us to serve at League on behalf of the autism community. We mourn his loss but celebrate his life, which has benefited so many children. It is our mandate to remain committed to excellence in autism education for years to come.”

Arnold and his wife Leona co-founded League School in 1966, in part so their son Richard would have a proper place to attend school. Richard was diagnosed with autism at an early age, and Arnold and Leona began searching for a place where their son could not only be treated, but also receive a proper education. Both tasks proved quite difficult, as very little was known at the time about Autism Spectrum Disorder.

After several years of Richard being enrolled in schools that failed to meet his needs, Arnold and Leona, along with Dr. and Mrs. Morton Olin, parents of another autistic child, began the process of forming their own school that would specialize in educating autistic children. This led to the founding of the League School in 1966.

Arnold worked tirelessly in the years that followed to grow and expand the League School into what it has become today. He oversaw the school’s transition from a small building in the City of Newton to its current location in Walpole.

“Arnold was a dedicated parent, who singularly focused on the wellbeing and welfare of his son and many other children,” said former League School Executive Director Frank Gagliardi. “His foresight and determination made League School the success it is today. He will be missed and forever remembered.” 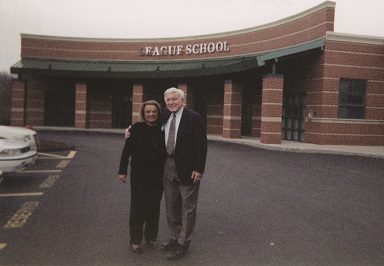 A Life of Service

Arnold was a member of the Boston Latin School Class of 1943, and upon enrolling at Tufts University immediately took the examination for the U.S. Navy V-12 program. He completed his Tufts dental training in 1945, and before beginning dental school he worked at Chelsea Naval Hospital as a Navy hospital corpsman trainee.

Following the conclusion of WWII and his discharge from the U.S. Navy, he entered Tufts Dental School as a member of their Class of 1949. Following graduation, he began a two-year commitment to serve as a dentist in the Army Dental Corps. The following year he began serving in the U.S. Army 3rd Infantry Division during the Korean War, where his prior training in the dental and medical fields proved highly valuable. He earned the Silver Star medal and Bronze Star medal for heroically retrieving and treating several wounded officers following a battle.

After four years of service, Arnold was discharged from the Army in 1953. He grew his dental practice in Framingham and became an assistant clinical professor at Tufts University for several years. Drawing on his background in the medical field and his desire to help others, he remained highly active in the dental industry for decades before transitioning out of his practice in 1995.

Arnold remained active with the League School following his retirement, returning to speak at the school’s 45th anniversary in 2011 where he described the current school as a realization of the dream he and his wife had all those years ago. He stated that the League School was one of the most meaningful experiences of his life.

“League School owes its very existence to Dr. Vetstein,” said League School Chief Executive Officer Lawrence E. Sauer. “We carry on his vision every day to provide our neurodiverse students with the best possible education. He will be greatly missed, and our condolences go out to Dr. Vetstein’s family and loved ones.”